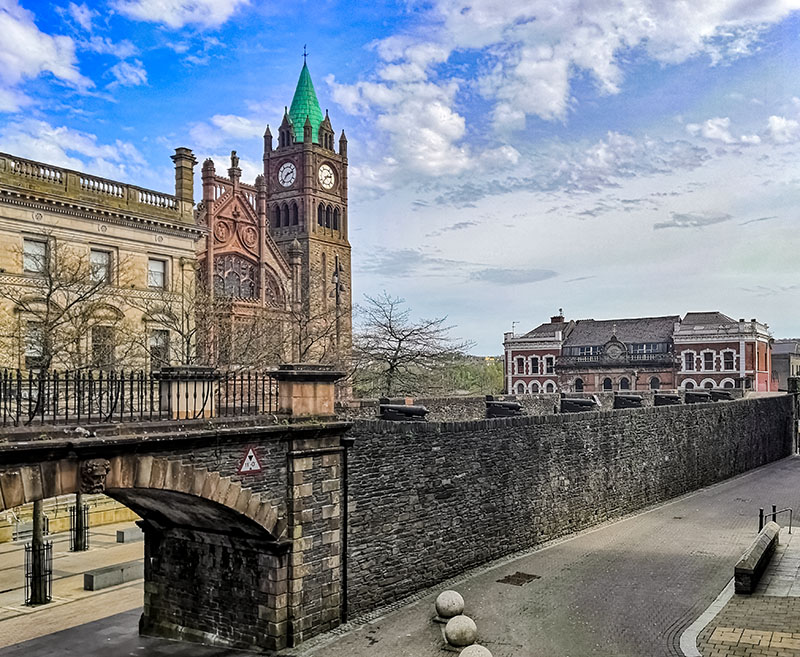 The Derry Walls are the most complete set of town walls in Ireland and the largest ancient monument in Northern Ireland. After the first 2 attempts to establish a settlement in the area failed, in the third attempt companies of London were charged with building and protecting the new settlement in exchange for the surrounding land and resources. Part of this was to build and arm fortifications to protect the new settlement. The walls were then built between 1613 and 1619 by the Honourable the Irish Society and the city was renamed to Londonderry to honour its connection to London.

The walls are around 1.3km in circumference, they vary in external height between 6 & 7.5m, have a width between 4 & 9m and the internal area is 13 hectors. Originally there was 4 gates (Butcher, Bishop’s, Ferryquay and Shipquay) then at later times 3 more gates were added (New - 1798, Castle -1803 and Magazine-1888). The walls cost £11,147, they were designed by Captain Sir Edward Doddington of Dungiven, they were laid under the direction of Thomas Raven a City of London Surveyor, supervised by Sir John Vaughan and Peter Benson a master tiler from London was responsible for the construction.

The effectiveness of the walls was tested during the siege of Londonderry, first when the gates were locked by 13 apprentices to prevent the Earl of Antrim who was loyal to James II from entering the city. Since he did not have the forces with him to attack such a well-fortified city he retreated. Then when James II came himself to claim the city, the city refused and rather than directly attack the walls he choose to put the city under siege. Several attempts to attack the city during the siege were unsuccessful and the walls were never breached giving the city its nickname of the Maiden City. Without the walls these events would likely have been very different and could have changed the outcome of the Williamite war in Ireland.

During the 19th century a group commemorating the apprentice boys that closed the gates was formed that every year march along the walls on the 12th August to commemorate the event. This has been the source of many contentions as it passes the majority catholic area of the Bogside, items being thrown from the walls by marchers and items being thrown from the Bogside at the marchers was what started the Battle of the Bogside in 1969. The walls were closed off for most of the troubles but the IRA still bombed the Walker monument in 1973 that was erected in 1828 in memory of Governor George Walker known as a siege hero.

Double Bastion is in a particularly important position as it looks along 2 stretches of wall and has the best view of the surrounding area. It was originally named Prince Charles Bulwark in honour of James I son later to be Charles I but was renamed during the siege.
Royal Bastion

Royal Bastion was first known as Docwra’s Bulwark, named after Sir Henry Docwra who was sent to reoccupy Derry by Queen Elizabeth I in 1600, it was named Royal bastion during the siege because the crimson flag was flown from it in defiance of the attackers. This would have been an important bastion during the siege as most of the attacking was directed at Butcher gate nearby.
The Platform

The Platform is rectangle bastion that along with Royal bastion and Double Bastion would have been important in projecting Butcher Gate from attackers. Below there is now a grassy slope but there used to be houses right up to the walls. During the troubles it was common for projectiles to be thrown to and from the walls and the houses below so a large fence was erected to prevent it that is still here today.
Hangman's Bastion

Hangman’s bastion is rectangle demi-bastion that got its name when someone trying to escape the siege got his neck caught in the rope he was using to lower himself down. It is now surrounded by buildings but before that the area below it was enclosed as a parade ground and you could see Culmore Fort in the distance.
Artillery Bastion

Artillery Bastion got its name from the artillery stores located next to it, the street next to it is also called artillery Street. Prior to mid-18th century it was called Ferry bastion as it overlooked the location where ferry’s crossed the Foyle. The cannon on a large field carriage was commissioned by the Salters company in 1642 and the damaged cannon on the ship carriage was commissioned by the London Corporation in 1624, the damage on it happened during the siege when a cannon ball exploded while stuck in its muzzle.
New Gate Bastion

New Gate Bastion’s original name was London Bastion, it was renamed during the siege to New Gate which was the former name for Ferryquay Gate the current New Gate wasn’t built till along time after. The 2 Cannon are from 1642, their barrels are inscribed with the names of the London companies that commission them, the Grocers and the Mercers.
Church Wall

Church Wall is an extension of the walls built to protect the Cathedral from cannon fire, it has 2 watch towers on either side and would have had a platform for soldiers to stand on. Each of the bastions would have had similar watch towers but these 2 are the last to survive, they would have provided shelter from the rain for soldiers on duty. In this wall there is a sally port which was used by defenders to make surprise attacks against attackers.
Church Bastion

Church Bastion was originally named King James’ bulwark in honour of James I but was renamed during the siege because of its proximity to the Cathedral. The 2 cannon on this bastion date from 1942 and were commissioned by Marchant Taylers London. This Bastian over looks the fountain estate and houses were built right against the walls from 1830 -1970. It now offers good views over the Fountain and over to the other side of the Foyle. The Fountain got its name from the reservoir that was built right next to this bastion in 1810.
New Gate

New Gate was first an opening made in the walls in 1787 to allow access to Wapping lane(now Fountain Street) it was turned into a gate just before the United Irishmen Rising of 1798 and then remodelled to its present state in 1866. It was the first of the 3 new gates created in the walls and retained the name New Gate as it was known at the time.
Butcher Gate

Butchers gate is one of the original 4 gates, it was named because of the butchers in the street adjacent is where the cows raised in Cowbog were slaughtered. Outside the walls was tanners row which was named after the leather trade in the area. It was remodelled in 1790 and again in 1805-1808, its height was almost doubled to allow for better access. If you look closely at the stonework of the gate you can see the height of the original gate.
Bishop Gate

Bishop’s Gate was one of the 4 original gates to the city and was named because it was adjacent to the Bishops palace. Originally it would have had a single arch and battlements on top of it and a drawbridge as outside there was a dry ditch to hinder attackers. The gate was extensively remodelled by Bishop Frederick Hervey in 1789 at the centenary of the closing of the gates, turning it into the most extravagant gate of the city. The sculpted head were created by Edward Smyth, the one on the inside represents the River Boyne and the one on the outside represents the River Foyle.
Ferryquay Gate

Ferryquay gate was one of the original 4 gateways, it was used to access the ferry that crossed the Foyle. It originally had twin battlement towers and a draw bridge, it was also the where the 2nd jail of the city was based. It was this gate that the Earl of Antrim approached that was then locked by the apprentice boys in 1688. The gate was remodelled in 1865, it is decorated with 2 models heads on the inside is Reverend James Gordon, a Presbyterian leader during the siege and on the outside is Reverend George Walker, Joint Governor of the city during the siege.
Magazine Gate

Magazine gate was added to the walls in 1888 to give better access to the river front which had moved away from the walls over the years, when the walls were built this corner of the walls was right on the river. The street it leads onto is known as Magazine Street and in the early years of the city it was used to store munitions. In the 19th century there were many store houses along the street and it was difficult to access them from horse and carriage from Shipquay gate so Magazine Gate was built to allow easier access.
Castle Gate

Castle Gate is narrowest and plainest of the gates, it was built in 1803 and was largely reconstructed in the 1990s. In the 18th century the city had outgrown the walls and houses and factories were increasing being built outside the walls. One of the first areas to be built up was along Waterloo street then known as Cowbog which was a meadow that was used to graze cows. This Gate was the 2nd new gate to be built and allowed easy access between Castle Lane(now Castle Street) and the buildings outside.
Shipquay Gate

Shipquay Gate was one of the original 4 gates to the city, it was remodelled in 1805 and has a single archway. It originally would have had a tower on it and was the access point for ships docked in the Foyle as the river Foyle would have been adjacent to the walls at the time. The gate is decorated with classical symbols of prosperity & commerce and the city’s coat of arms.
More Details: Website, Facebook