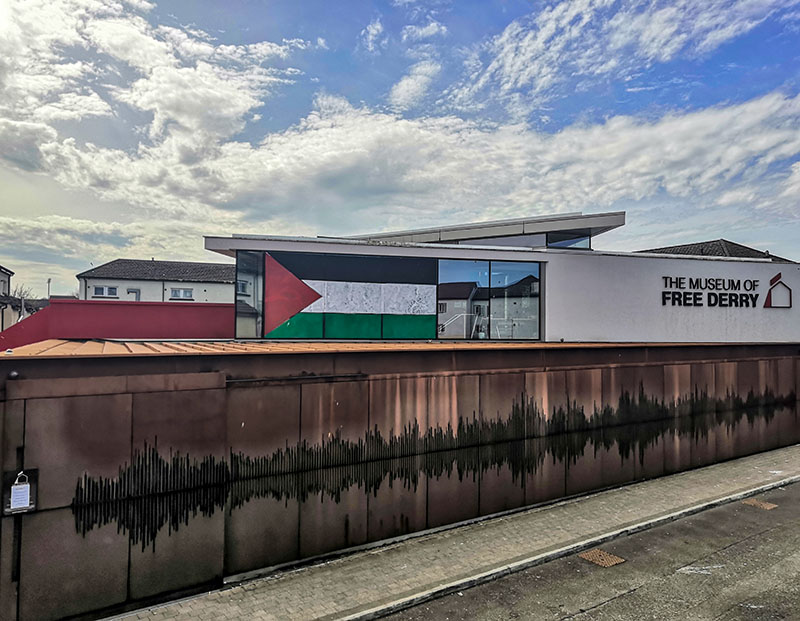 The civil rights events in Derry started in 1968 and was known as “Free Derry”, this was part of the wider movement in Northern Ireland because of the discrimination against Irish Catholics. This ended in 1972, when 13 civilians were shot by British Paratroopers during an anti-interment march in the Bogside, known as Bloody Sunday, leading to a massive upsurge in violence across Northern Ireland.

The Museum of Free Derry was set up to tell the story of Free Derry from the point of view of the people most affected. The museum was opened in 2007 in a once-derelict housing block that was in the middle of the events of Bloody Sunday. Some of the main events covered in the Museum are; the civil rights era, Battle of the Bogside, Bloody Sunday and operation Motorman.

The Museum contains a Multimedia exhibition, including images, video, items and banners from the civil rights era. Tours are available at the Museum that cover the history of the Bogside and civil rights era. A visit to the Museum of Free Derry is a must for any visitor that has an interest in civil rights or the Troubles as some of the most significant events took place in the Bogside.

The Bogside is a neighbourhood outside the city walls of Derry, County Londonderry, Northern Ireland. The large gable-wall murals by the Bogside Artists, Free Derry Corner and the Gasyard Féile (an annual music and arts festival held in a former gasyard) are popular tourist attractions. The Bogside is a majority Catholic/Irish republican area, and shares a border with the Protestant/Ulster loyalist enclave of the Fountain.
Free Derry Corner

Bloody Sunday was a massacre on 30th January 1972 in the Bogside when 14 civilians were killed and at least 15 were injured by British Paratroopers during a protest match against interment without trial. Inquires after it cleared the soldiers of wrong doing but were widely considered a whitewash, in 1998 a new enquiry “The Savile Enquiry” was started, after 12 years the report branded the killings "unjustifiable".
Bogside Murals

The Bogside Murals are a set of 12 large scale murals in the Bogside area, they were painted and maintained by the Bogside Artists®, a group of 3 artists Tom and William Kelly, and Kevin Hasson. The murals represent the people of the Bogside and their history of seeking justice and democratic rights.
More Details: Official, Youtube, Facebook