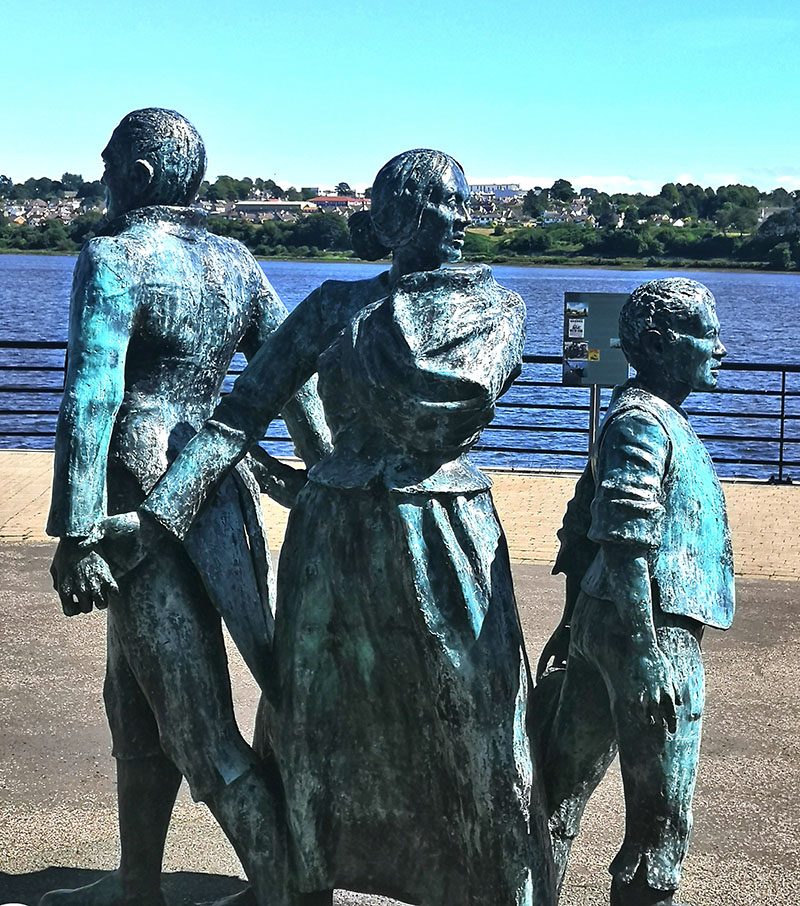 Emigration has been one of the central features of Irish life over the last 300 years. Tens of thousands of people have left from the Lough Foyle and Carlingford Lough areas to seek a new and hopefully better life in Britain, North America, Australasia and elsewhere. The ports of Londonderry, Newry and Warrenpoint were important conduits of these migrations. Emigration in the eighteenth century is usually associated with the departure of Presbyterians, usually of Scottish descent, from Ulster, while in the nineteenth century it is generally related to the exodus as a result of the Great Famine.

Over the centuries thousands of people have used the port of Derry to travel overseas in search of a new life. In the eighteenth century Derry was one of, if not the, most important Ulster port in the emigration trade. In July 1729 one Derry merchant reported that 25 ships had left the port that summer already, each carrying 140 passengers. Not only did ships sail from Derry to Colonial America, some also sailed to Canada, docking in Nova Scotia. Emigration to America was closely linked to the flaxseed trade, itself crucial to Ulster’s economy. Ships bringing flaxseed to the province were refitted to carry migrants back across the Atlantic. Other ships brought timber or cotton to Ireland and Great Britain before returning with migrants. In the early nineteenth century there were several shipping companies operating a passenger service out of Derry. By the late 1830s ships from Derry were also sailing to Australia.

In the years leading up to the Famine the Cooke brothers, John and Joseph, established a small trading fleet between Derry and North America. On ships sailing out of Derry emigrants were carried; on the return voyages the cargo was timber. As a result of the Famine the numbers emigrating rocketed. In 1847 over 12,000 people left Derry, over 5,000 on ships owned or chartered by J. & J. Cooke. After 1847 the numbers emigrating declined quite dramatically. Another important shipping company at this time was the McCorkell Line, founded by William McCorkell and continued by his son Barry.

The catchment area for the port of Derry included nearly all of counties Donegal, Londonderry and Tyrone. A small number came from even further a field, including some from counties Fermanagh, Antrim, Roscommon and Leitrim. The Derry shipping companies were eventually forced out of the passenger trade by the steamships operating out of Glasgow and elsewhere. The last passenger voyage by a Derry-owned ship to New York was made in 1873. Those wishing to travel to North America were now carried down the Foyle in paddle tenders to Moville where they were transferred to the transatlantic steamships