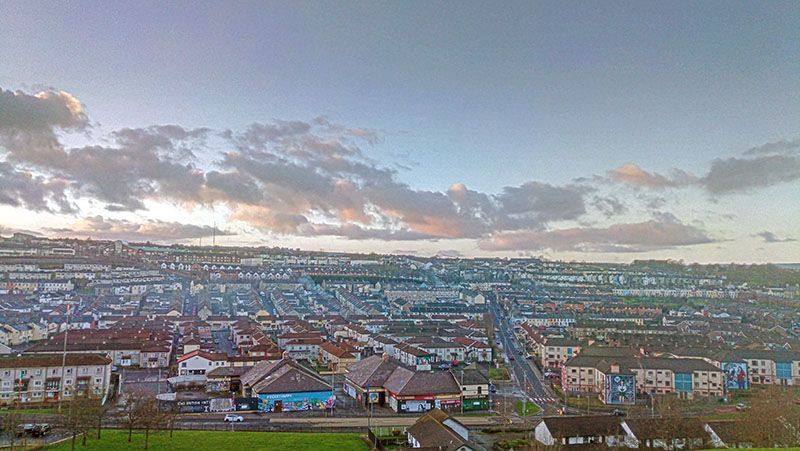 The Bogside is a neighbourhood outside the city walls of Derry, County Londonderry, Northern Ireland. The large gable-wall murals by the Bogside Artists, Free Derry Corner and the Gasyard Féile (an annual music and arts festival held in a former gasyard) are popular tourist attractions. The Bogside is a majority Catholic/Irish republican area, and shares a border with the Protestant/Ulster loyalist enclave of the Fountain.

The area has been a focus point for many of the events of the Troubles; in 1969, a fierce three-day battle against the RUC and local Protestants—known as the Battle of the Bogside—became a starting point of the Troubles. Between 1969 and 1972, the area along with the Creggan and other Catholic areas became a no-go area for the British Army and police. Both the Official and Provisional IRA openly patrolled the area and local residents often paid subscriptions to both. On the 30 January 1972, the Northern Ireland Civil Rights Association organised a march against internment that was put into effect the year before turned into a blood bath known as Bloody Sunday. The British Parachute Regiment shot dead 14 unarmed protesters and injured 14 more; this resulted in a large surge of recruitment for both wings of the IRA in the city.

After Operation Motorman and the end of Free Derry and other no-go areas in Northern Ireland, the Bogside along with the majority of the city experienced frequent street riots and sectarian conflict lasting all the way to the early 1990s. In 1974, the Official IRA declared an end to their armed campaign, and with volunteers on the ground already mad about the ceasefire in mid 1972, that crossed the line to hardliners. In result, Seamus Costello and other socialist militants formed the Irish Republican Socialist Movement. This new movement included the Irish National Liberation Army the paramilitary wing of the IRSM. Derry and particularly the Bogside became one of many strongholds for the INLA; in fact all three volunteers who died in the 1981 Irish hunger strike were from Derry or County Londonderry. The Irish People's Liberation Organisation, a breakaway group of the INLA, made a small but effective presence in Derry engaged in a feud with the INLA in the city along with other areas in Ireland from 1987 to 1992. The feud ended with the Provisionals stepping in and killing the main Belfast leadership while letting the rest of the organisation dissolve in the rest of Ireland. Throughout the rest of the 1990s, the Bogside became relatively peaceful compared to other localities of Northern Ireland at that time such as Belfast, even though street riots were still frequent.

Today the Bogside has experienced much change. It has seen minimal redevelopment compared to other areas in the city but 21st century houses are somewhat known throughout the area. The area is also a stronghold for Dissident Republican activity. The area after the Belfast Agreement has always been known to frequent street riots but the largest since 1998 were the 2011 Northern Ireland riots. The riots took place in other parts of Northern Ireland but in Derry city they were mostly in the Bogside. The vigilante group Republican Action Against Drugs formed in 2008 has a very strong presence in the Bogside. The group's goal is to use punishment shootings and even kill any suspected drug dealers.

The Bogside Murals are a set of 12 large scale murals in the Bogside area, they were painted and maintained by the Bogside Artists®, a group of 3 artists Tom and William Kelly, and Kevin Hasson. The murals represent the people of the Bogside and their history of seeking justice and democratic rights.
Museum of Free Derry

Bloody Sunday was a massacre on 30th January 1972 in the Bogside when 14 civilians were killed and at least 15 were injured by British Paratroopers during a protest match against interment without trial. Inquires after it cleared the soldiers of wrong doing but were widely considered a whitewash, in 1998 a new enquiry “The Savile Enquiry” was started, after 12 years the report branded the killings "unjustifiable".
More Details: Wikipedia