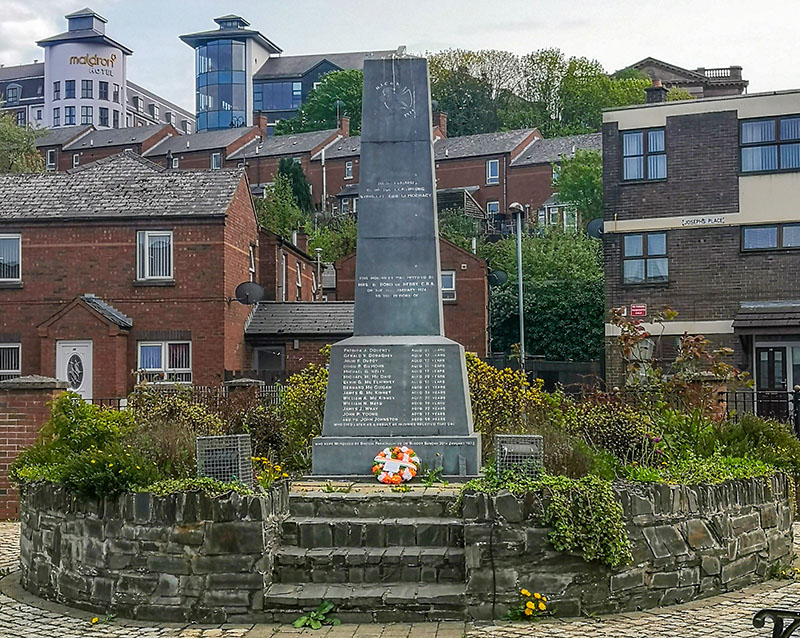 Bloody Sunday happened on 30th January 1972 when around 15,000 people gathered in Creggan for a march against internment without trial. The march proceeded down Southway, through the Bandywell and into the Bogside were most of the marchers waited at the Free Derry Wall to hear speakers.

While most were waiting on the speakers, some engaged in rioting at William street where the army had set up a blockade. While this was going on the army opened fire on the protestors gathered to hear the speakers at the Free Derry Wall, away from the rioters on William Street and then proceeded into the Glenfada Park cul-de-sac where the shooting continued. In total 26 civilians were shot, 13 died immediately, 1 died four months later failing to recover from his injuries and at least 3 others were seriously injured by other means.

The soldiers claimed that they had been fired upon, only reacted in self-defence and everyone that died was armed. This story is what was spread by the British media across the world. An inquiry was issued shortly after the shooting and Lord Chief Justice, Lord Widgery was put in charge of it, he was not trusted by most of the witnesses as there had no faith in his impartiality. The report was quickly produced in only 10 weeks and fully supported the army’s account of the events but much of the evidence used was questionable including evidence of gun fire found solely on the right hand of a left handed man.

In the aftermath of Bloody Sunday there was a general strike in the Republic of Ireland, the British Embassy in Dublin was burned down and there was a demand made to the United Nations Security Council to have UN peace keeping forces deployed in Northern Ireland. The attitude towards the British army among Nationalists, which wasn’t that bad beforehand as many seen the British army as protectors from unionist mobs, dropped severely and support for the Provisional Irish Republican Army increased particularly among young men who were recruited into the organisation. Over the next twenty years violence in Northern Ireland increased massively and Bloody Sunday is identified as one of the main reasons that it happened.

In 1998 after attempts to get former prime minister John Major to have another inquiry into Bloody Sunday failed, Tony Blair, the prime minister at the time, commissioned a new inquiry. The inquiry was chaired by Lord Saville and Judges; John Toohey from Australia, Edward Somers from New Zealand and William Hoyt from Canadian were also part of the inquiry. The hearings from the inquiry took seven years and the final report was published in 2010, making it the biggest investigation in British history. The Saville report concluded that:

“The firing by soldiers of 1 PARA on Bloody Sunday caused the deaths of 13 people and injury to a similar number, none of whom was posing a threat of causing death or serious injury“

In response to the report Prime Minister David Cameron made an apology in parliament saying:

“Mr Speaker, I am deeply patriotic. I never want to believe anything bad about our country. I never want to call into question the behaviour of our soldiers and our army, who I believe to be the finest in the world. And I have seen for myself the very difficult and dangerous circumstances in which we ask our soldiers to serve. But the conclusions of this report are absolutely clear. There is no doubt, there is nothing equivocal, there are no ambiguities. What happened on Bloody Sunday was both unjustified and unjustifiable. It was wrong.”

The Bogside is a neighbourhood outside the city walls of Derry, County Londonderry, Northern Ireland. The large gable-wall murals by the Bogside Artists, Free Derry Corner and the Gasyard Féile (an annual music and arts festival held in a former gasyard) are popular tourist attractions. The Bogside is a majority Catholic/Irish republican area, and shares a border with the Protestant/Ulster loyalist enclave of the Fountain.
Museum of Free Derry

The Museum of Free Derry is a museum in the Bogside area of the city that focuses on the civil rights movement in Derry 1968-1972. It doesn’t just cover local events it also covers civil rights movements a massacres in other parts of the world, so that people can make comparisons.
Edward Daly

Edward Kevin Daly, D.D. (5 December 1933 – 8 August 2016) was an Irish Roman Catholic priest and author. He served as the Bishop of Derry from 1974 to 1993. Daly took part in several civil rights marches and events during the Troubles. He came to wider attention during Bloody Sunday in January 1972, waving a blood-stained white handkerchief as he escorted a group carrying a mortally wounded boy after British troops opened fire on demonstrators.
Bridget Bond

Bridget Bond was one of the most well-known leaders in the civil rights movement in Ireland. Bond was a member of the Northern Ireland Civil Rights Association and her efforts to secure fair share in housing for the Catholics of Derry mushroomed into one of the most multifaceted and mass-supported issues of any civil rights movement.
More Details: Wikipedia, Museum of Free Derry, The Saville Report