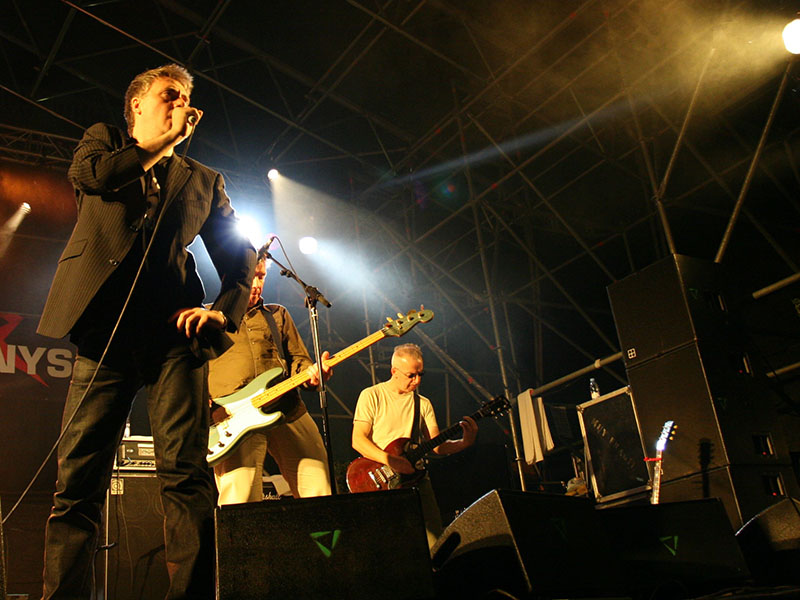 The Undertones are a rock band formed in Derry, Northern Ireland in 1974. From 1975 to 1983, the Undertones consisted of Feargal Sharkey (vocals), John O'Neill (rhythm guitar, vocals), Damian O'Neill (lead guitar, vocals), Michael Bradley (bass, vocals) and Billy Doherty (drums). Much of the earlier Undertones material drew influence from punk rock and new wave; the Undertones also incorporated elements of rock, glam rock and post-punk into material released after 1979, before citing soul and Motown as the influence for the material released upon their final album. The Undertones released thirteen singles and four studio albums between 1978 and 1983 before Sharkey announced his intention to leave the band in May 1983, citing musical differences as the reason for the break up.

Despite the backdrop of the Troubles in Derry and across Northern Ireland, the vast majority (though not all) of the material the Undertones released focused not upon the political climate, but upon issues such as adolescence, teenage angst and heartbreak. The merging of instruments has led AllMusic to state that guitarists John and Damian O'Neill "mated infectious guitar hooks to 1960s garage, 1970s glam rock, and Feargal Sharkey's signature vocal quaver."

The Undertones formed in Derry, Northern Ireland in 1974. The band members were five friends from Creggan and the Bogside, who originally drew inspiration from such artists as the Beatles, Small Faces and Lindisfarne. The band initially rehearsed cover versions at the home of the guitarists, brothers John and Vincent O'Neill, and in the shed of a neighbour. (In early 1976, before the band had played gigs at any venues, Vincent O'Neill left the band; being replaced by his younger brother Damian.)

Beginning in February 1976 the group, at this stage still unnamed, began playing gigs at various minor local venues, including schools, parish halls and Scout huts, where the band's lead singer, Feargal Sharkey, was a local Scout leader. Sharkey was also responsible for giving the band their first name: at the introduction to a gig at Saint Joseph's Secondary School in Derry on 16 March 1976, Feargal Sharkey was asked the name of the band and quickly replied "The Hot Rods". At a later gig, Sharkey named the band "Little Feat": another name already used by another group.

Later that year, drummer Billy Doherty proposed an alternate name for the group: The Undertones, which Doherty had discovered in his school history book. The other members of the band agreed to the proposal. With the arrival of punk rock in late 1976, the artistic focus of the band changed. Artists such as the Adverts, Sex Pistols, Buzzcocks and, particularly, the Ramones became major influences on the Undertones. In addition to being a Scout leader, Feargal Sharkey worked as a television repairman and delivery man. The van which Sharkey drove in this employment was used by the Undertones to transport their equipment to and from various venues.

By 1977 the band were performing their own three-chord pop punk material, which was performed alongside cover versions at concerts, primarily at the Casbah, where the band began to perform in February. The Undertones had occasionally earned money at venues where they had performed throughout 1976, but these gigs at the Casbah were the first performances for which the Undertones were paid on a regular basis, as performing at the Casbah earned the group up to £30 for each attendance fee. Both the money earned and their popularity at this venue inspired the band to write and rehearse further material, as a means of remaining a popular act at the Casbah. By mid-year, the concerts the Undertones performed would include the song "Teenage Kicks", which had been written by guitarist John O'Neill in mid-1977. The gigs performed at the Casbah gave the Undertones increased confidence in their musical ability, and in June 1977 they performed concerts outside Derry for the first time, supporting a Dublin punk group named The Radiators from Space.

In March 1978, the Undertones recorded a demo tape at Magee University in Derry and sent copies of the tape to various record companies in the hope of securing a record deal, but only received official letters of rejection. The band had also sent a copy of their recordings to influential BBC Radio 1 DJ John Peel, requesting he play the songs on his radio programme. Peel replied to the band, offering to pay for a recording session in Belfast. On 15 June 1978, the band recorded their debut four-song EP "Teenage Kicks" on a budget of only £200. The EP was engineered by Davy Shannon at Wizard Studios, Belfast, and was released on Belfast's Good Vibrations record label. The title song became a hit with support from John Peel, who considered Teenage Kicks his all-time favourite song, an opinion he held through to his death in 2004.