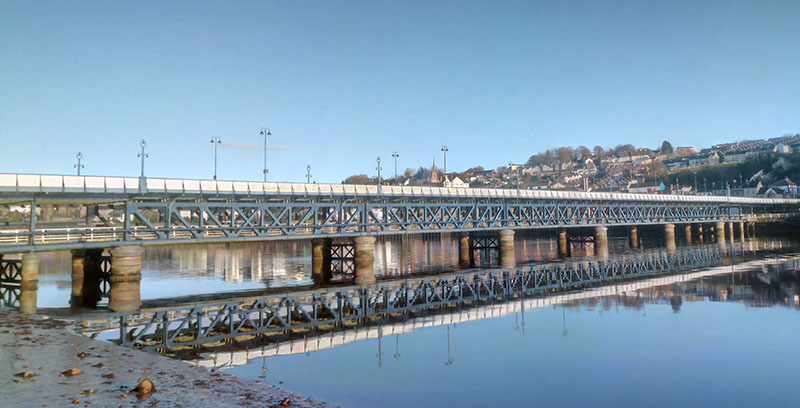 The Craigavon Bridge, named after Lord Craigavon the first Prime Minister of Northern Ireland, was opened in 1933. It was the 3rd bridge to be constructed in the area, the first was the old wooden Carlisle Bridge that was built in 1790, it was replaced by a steel version in 1863 which was about 90 metres south of the wooden version almost exactly where the Craigavon bridge is today.

The bridge is double deck steel bridge with a single carriageway road on each deck, it has a single footway on the lower deck and a footway on each side on the upper deck. It connects on the Cityside at the Hands Across the Divide Sculpture and at spencer road on the Waterside.

The bridge is one of only a few double deck road bridges in Europe and the only one in Ireland. The lower deck was originally a railway bridge that was used to transport carriages across the river between the 4 different railway networks that used to exist in the city. In 1968, when the railway lines were closed the lower deck was converted into a road bridge.

The River Foyle is the river that flows through Derry, it flows northeast from where the rivers Mourne and Finn join together at Strabane & Lifford and exits at Lough Foyle, which then exits into the North Atlantic. It is one of the fastest flowing rivers in Europe and there are 4 crossings 3 in Derry and one between Lifford and Strabane.
Foyle Bridge