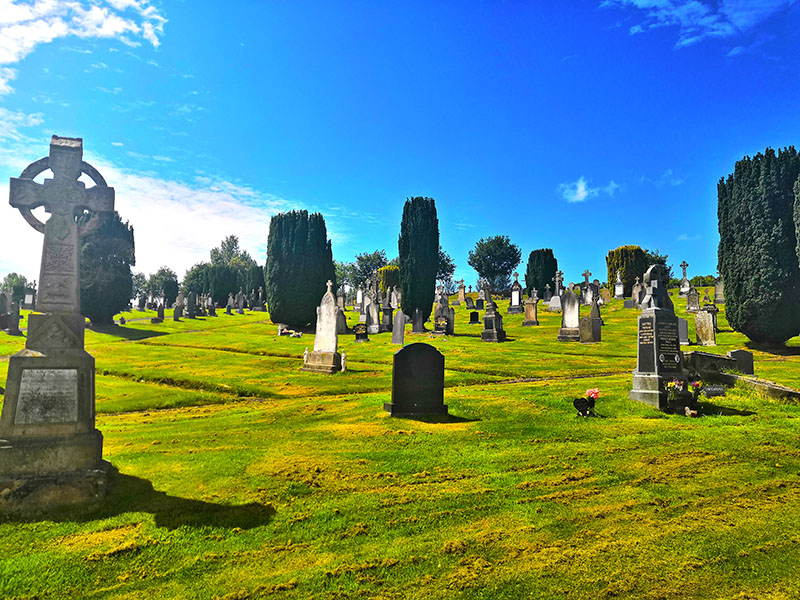 The City Cemetery based on the hill in Creggan is the largest cemetery in the city and very visible from the city centre. The main cemeteries before it were at St Columb’s Cathedral, St Augustine’s and the Long Tower. By the middle of the 19th century these became overcrowded so a new municipal cemetery was built in 1853 and by 1867 the 3 main cemeteries in the city centre stopped accepting new burials. The cemetery was the main burial place for both Catholics and Protestants until Altnagelvin cemetery opened in the 60s which then became the preferred burial place for Protestants.

The evolution of grave stones over the years is very visible, Victorian era graves often showed the person’s status, rich people with often be buried with ornate monuments often in neo classical styles influenced by ancient Greek and roman art. Throughout the 20th century graves became much more subtle, mostly influenced by regulations for size and stone surrounds disappeared to be replaced by lawns.

The City Cemetery has went through many expansions and more are planned and is the final resting place for over 70,000 people including some of the city’s most famous people:

William Tillie (1824–1904) – Established the first shirt factory in Derry with his partner John Henderson in 1851.

A project to preserve the history in the cemetery from Friends of Derry City Cemetery is underway as many headstones have started to decay or have the subject to vandalism. The project hopes to photograph all the early headstones, add some research and leave it for future generations. A project from the Tower Museum has put many of the burial records into an online database. Tours of the cemetery available from Friends of Derry City Cemeteries that takes you around the sections of the cemetery and gives the history behind the graves.