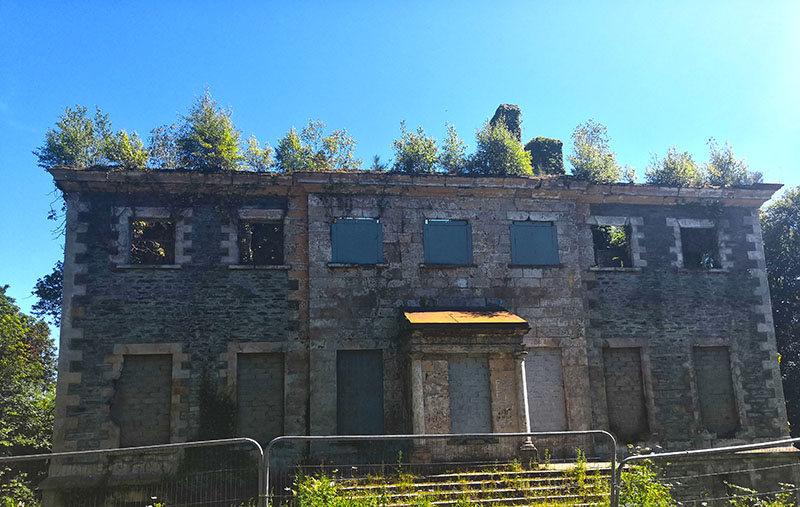 Boom Hall is a house and demesne on the west bank of the River Foyle next to the Foyle Bridge. In looks down on the site of the boom that was built by Jacobite forces across the river to prevent ships from making it to the city during the siege. The boom was made up of wooden trunks tied together with thick ropes and chains and was anchored to the rocky outcrop just north of the Boom Hall building. On the site of Boom Hall was Charles fort and on the other side of the river was Grange fort were Jacobite solders used cannons to defend the boom. The boom was breached by three ships the Dartmouth, Phoenix and the Mountjoy on 12th August 1689 ending the siege.

Following these events the siege this estate became known as Boom Hall. The current building was constructed by the Alexander family in 1779 likely to replace a previous building, there is some evidence of it nearby. The house was designed by Michael Priestly who died before construction started so some design my have been changed during construction. It is a 2 story building in Georgian and classical styles with a basement.

Originally it was lived in by Robert Alexander, a merchant that was the younger brother of James Alexander, who built the house and was to be later named Baron Caledon. After than the house was leased and lived in by several notable tenants including Thomas Gough, Dean of Derry and Richard Ponsonby, Church of Ireland Bishop of Derry and Raphoe. In 1849, it was purchased by Daniel Baird who let the house to Shipping Company owners John and Joseph Cooke, who lived there till 1883. Sir John Barr, Mayor of Derry and James Corscaden, a ship owner lived here for a time before the son of Joseph Cooke moved in until his death in 1923.

The estate was inherited by Charles Edgar Maturin-Baird who leased it and later sold it to Michael Henry McDevitt. During the 2nd world war it was used by the Admiralty who built Quonset huts on the estate for Royal Navy and Women’s Royal Navel service personnel. McDevitt carried out renovations following the war but it suffered from neglect and was almost destroyed by a fire in the 1970s.

The demesne was dived by construction of the Foyle Bridge, the property which was abandoned was purchased by the local council, part of the estate was sold then the Foyle Hospice was built on the land and most of the land is now used to graze horses. 30 acres remain associated with the Hall and are home to some of the oldest Oak Trees in the City and the biggest concentration of heritage trees in the city.

Restoration of the house and the area is currently being planned by 2 groups, Foyle River Gardens Project and Boom Hall Trust.

The Foyle River Gardens Trust want to create a £45 million world class tourism and heritage Eden Project. The project is expected to open up the Boom Hall and the nearby Brook Hall estates to 400,000 people a year. This includes a restoration of the Boom Hall House, the walled gardens and opening up 225 acres of previously inaccessible land to the general public and tourists.

Eden Project Foyle plans to create sunken labyrinths, futuristic roof gardens and a nature based play experience. The spaces will be joined by weaving pathways, floating board walks, rope bridges slides and zip wires, to create the worlds most playful landscape. There will also be a large indoor play space, inspired by nature called The Acorn which will be an architectural showpiece and will include a mix of nature based play and tree top walkways.

Boomhall Trust is a local charity in the city that is working with a range of stakeholders to develop and agree a new community led, masterplan for the historic natural and built environment at Boomhall estate which is situated at Foyle Bridge on the West Bank of the River Foyle.

Their aim is to protect, restore and enhance the rich heritage of this unique place for future generations by restoring the natural and built environment at Boomhall to its former glory and developing the site into an accessible and shared public space where residents of all ages and visitors to the City/District & Northwest can come to safely explore and enjoy with their family and friends all year long.

Currently Boom Hall isn’t much to look at as it is just a shell of a building but with its large old trees it does form a nice addition to a walk along the Foyle Greenway. Its future prospects are quite exciting and is sure to become a must visit area in the near future.

The Siege Museum is a permanent exhibition of the history of the Siege of Londonderry and associated clubs, located right next to the Apprentice Boys Memorial on Society Street. The Museum has artefacts from the past & present, an educational and interactive visitor experience and guided tours.
Siege of Londonderry

The Siege of Londonderry was the first major event of the Williamite war in Ireland, it was the 2nd attempt by Jacobite forces to take control of the city. King James II himself appeared himself with an army of Irish and French. After the city refused to surrender and attempts to storm the walls failed, they resorted to try and starve the city into surrender.
More Details: Wikipedia , Website, Boomhall Trust, Facebook, Eden Project